I have for many years made studio works using material gathered from the landscape, stones, shells, and driftwood etc. In common with many people, I have always brought home “treasures” from the sea pebbles, shells etc. They act as an “aide – memoir”, bringing the landscape into your home so a mere glimpse or touch might recall the feelings of being alone on a remote beach.

Realising that I (naturally) tended to bring back to the studio particularly beautiful objects to photograph, I began to make works out of increasingly insignificant material collected at random rather than highly selected. In 1999 I made a series of works called “A day at the beach” which were studio works made from (literally) a random handful of beach material collected after a walk on a beach, arranged and photographed in the studio.

Out of this work came the idea to find the most trivial and insignificant thing from which to make beautiful and thought provoking work. I started to bring sea water back from my trips to remote beaches and it took about four years to fully develop techniques where I can construct a negative made of sea water dried and crystallised in an organised manner on clear acetate or glass plated. They take many days to make, repeatedly applying drops of seawater and waiting for it to dry. I call them Seaworks. 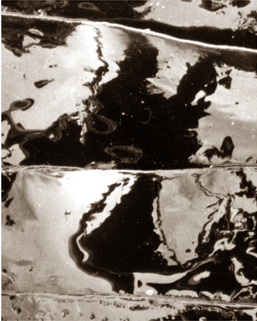